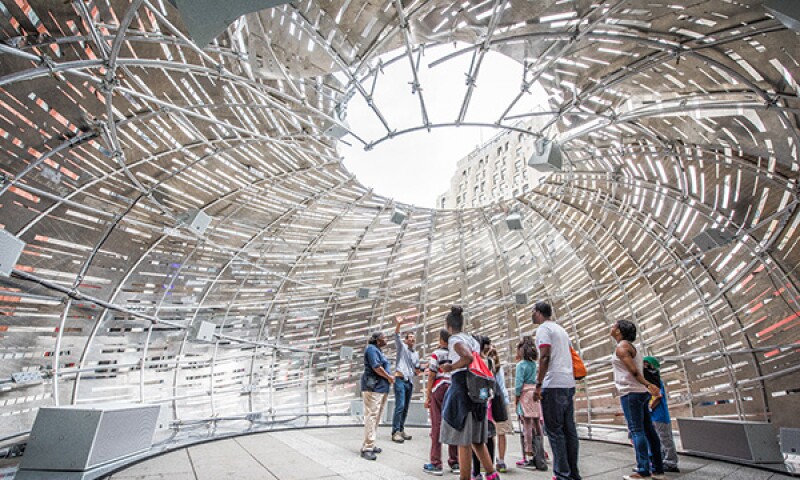 Interior view of Orbit Pavilion at the May 2015 World Science Festival at New York University.

Satellites that study the Earth are passing through space continuously, collecting data on everything from hurricanes to the effects of drought. What if you could make contact with these orbiting spacecraft, and bring them “down to Earth?” Visitors can do exactly that when NASA’s Orbit Pavilion sound experience touches down at The Huntington this fall. The outdoor installation is the brainchild of Dan Goods and David Delgado, visual strategists at NASA’s Jet Propulsion Laboratory who worked in collaboration with composer Shane Myrbeck and architect Jason Klimoski of StudioKCA to produce an innovative “soundscape” experience representing the movement of the International Space Station and 19 Earth Science satellites.” Inside the large, shell-shaped sculpture, distinctive sounds are emitted as each satellite passes overhead: a human voice, the crashing of a wave, a tree branch moving, a frog croaking. Each sound interprets one of the satellites’ missions.

The exhibition inaugurates a new initiative at The Huntington focused on creative collaborations with other organizations. The new project, called “Five,” pairs The Huntington with five different organizations over five years, bringing in a range of contemporary artists who will respond to themes drawn from some aspect of the collections. The Library’s aerospace history holdings made this first collaboration with NASA/JPL a perfect way to launch the new initiative.